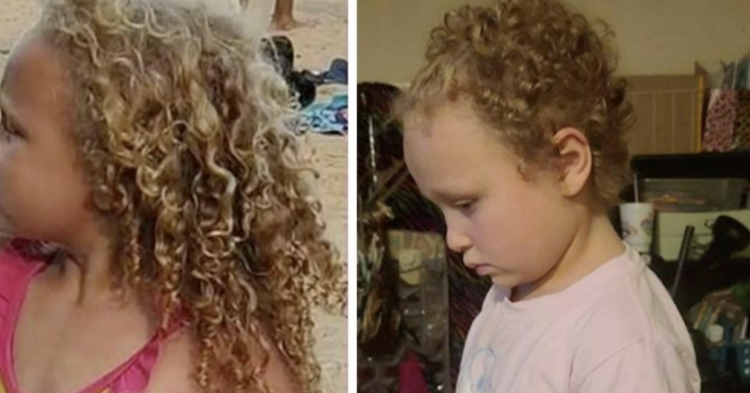 Many little girls take pride in their hair. Jurnee Hoffmeyer, seven, was no exception. As a biracial girl, she had very beautiful long auburn locks that traveled all the way down her back. However, Jurnee was targeted by another child during a ride on a school bus, and that other student cut the girl’s hair without permission. Although Junree’s father, Jimmy Hoffmeyer, did not hold any hate against the child, he did become furious when the teacher responded by cutting off the rest of his daughter’s hair.

“I mean, I chalked it up because it was a child, and you’re not thinking of any serious consequences having to do with a kid.”

Hoffmeyer took his daughter to the hair salon on the same day that the other child cut her hair. He wanted the salon expert to fix his daughter’s hair while keeping it as long as possible. Jurnee loved her long hair and didn’t want it to go away if she could help it – despite what the other kid had done on the bus.

“So what we did is we took her to the salon to get a cut as an asymmetrical. She had a little short here, but long still talking about her shoulders on this side.”

The hairstylist did a good job repairing the damage to Jurnee’s hair. Although it was shorter after the cut, Hoffmeyer’s daughter was still happy with the way she looked. She went to school the next day. But when she came home, her hair was cut shorter, and she was in tears.

This time, a student had not cut the girl’s hair. Instead, it was the teacher who ruined Hoffmeyer’s daughter’s beautiful hair by cutting almost all of it off the girl’s head. Now, Hoffmeyer is trying to figure out why the teacher cut off his daughter’s hair without getting parental permission. All he knows so far is that his daughter was outraged by the unwanted short haircut.

Although Hoffmeyer, a Black man, believes the teacher meant well, the educator never should have taken shears to his daughter’s locks.

“Our kind of hair, you can’t just wet down and cut it because and that’s when I feel like they should have, even if they were trying to do it in the kindest of their heart, once they saw the outcome, they should have been like, yeah we messed up. We should probably call him and let him know what just happened.”

BNC News published a video about the incident on YouTube, which attracted dozens of comments.

“Who cuts a child’s hair without a parent’s permission?  Luckily she didn’t ask for a teardrop tattoo. He’s not nearly as upset as I am, and I don’t even know them.”

“Sue the school. Sue the teacher. Let them explain it to your lawyer.”

What do you think about how this girl’s teacher cut the child’s hair without permission from dad?