Woman Furious About An Unleashed Dog Lures Him Into N.Y.C. Traffic 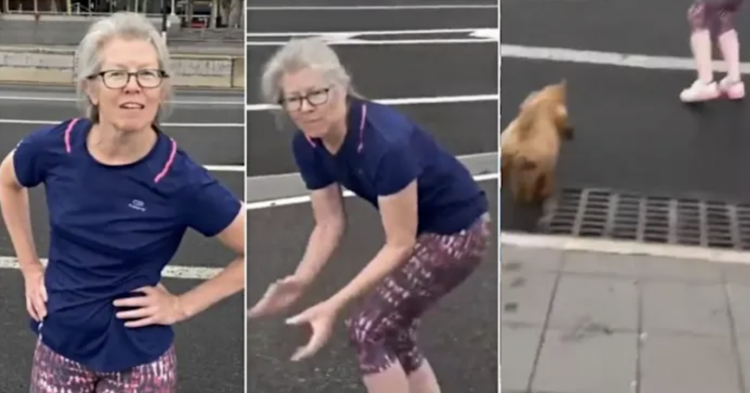 In New York City, an aging white woman tried to kill an Asian man’s dog by luring it into traffic. The woman took offense to the man because he was out and about with his dog, not on a leash. In addition to threatening to call the police on the man for having his pooch off the leash, the woman also tried to lure the dog into a busy road to prove her point about the leash while ordering the Asian man to go back to his “own country.”

The racist anti-Asian attack was caught on camera and has been widely shared across social media. The video starts with the woman complaining about the unleashed dog before she tries to lure the pooch into the busy road.

“Have you never heard of a leash in the city?” the first woman asks. “We’ll wait for the police to clear it up.”

The man began filming the encounter because the woman used racism to attack him. He wanted her to repeat her statement about him going back to another country.

“Which country should I go back to, Karen? Say it,” he said. “Cat got your tongue?”

At that point, the woman takes her rage one step further. She claps her hands at the dog and tries to lure it into the street to have it struck by traffic speeding on by. When she doesn’t succeed at first, the woman tries again to lure the dog into traffic. When she finally gets the dog to follow her into the dangerous scenario, the pet owner is forced to chase after his dog to rescue it from certain death.

One bystander calls out the “Karen” for her horrible behavior.

“You’re actually instigating a dog to go to the middle of a highway? What kind of problem do you have, lady?” the female bystander asks. “You insult someone of Asian descent … Why don’t you go back [to] where you came from? Who are you? Leave people alone.”

The video comes to an end when the white woman sees a New York Police Department vehicle. Although she was in the wrong throughout the incident, she felt entitled to go to the police and receive help from the officers. However, the video cuts out before it is clear if the police resolved the issue or not.

Social media users criticized the woman for trying to kill the man’s dog.

“There’s a way to tell someone to put a leash on their dog. This isn’t it,” one user commented.

Another person wrote, “Seriously. People who don’t obey leash laws are the worst. They’d have been 100% in the wrong here, but this lady H.A.D. to one-up them by being an insufferable, racist a**hole.”

New York City has a law that requires dog owners to keep their animal on a leash when in public or “in any open or unfenced field abutting a public space.” While the woman was not wrong about the leash law, she was wrong in how she approached the situation.