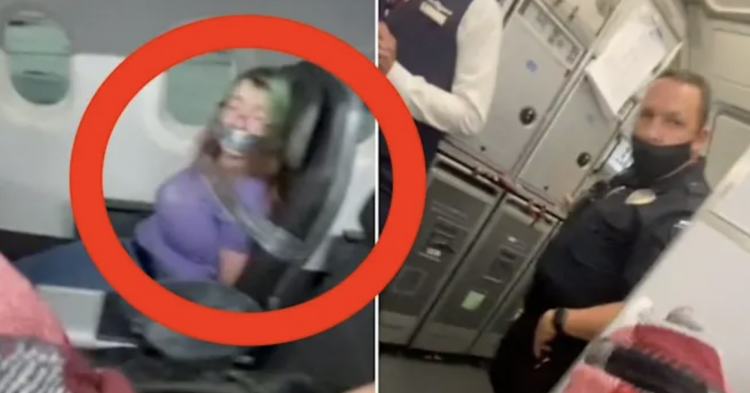 American Airlines allegedly used duct tape to keep a female passenger in her seat after she tried to open the emergency exit while the flight was in the air. Although American Airlines could not risk letting the woman open the door mid-flight, people were outraged when they saw how they taped her up with duct tape after someone recorded and posted a video of the incident to the Chinese-created social media website, TikTok.

Details of the incident are as follows. The woman who was duct-taped was on a flight from Dallas-Fort Worth, Texas to Charlotte, North Carolina, on Tuesday. It was American Airlines Flight 1774 where this incident occurred.

TikTok user @lol.ariee was the person who caught the incident on video. The clip shows the unidentified woman strapped to her airplane seat with duct tape. The tape is around her chest, so she is stuck to the seat but is also around her mouth to keep her silent for the rest of her time aboard the American Airlines flight.

In the video, the woman attempts to scream and yell at other passengers who are leaving the flight now that it has landed in North Carolina.

Because the video went viral due to the craziness it showed the world, the TikTok user created a follow-up video to provide people with more information regarding the incident. The TikTok user reported that the incident first became serious about an hour into the two-hour flight. The woman tried to open the emergency exit while the plane was in the air so that “all flight attendants were running up and down the aisles, frantically kind of like whispering to each other.”

The TikTok user said that the flight crew was not telling everyone what happened. Nevertheless, they were locking doors and the bathrooms and grabbing luggage out of the overhead compartment. The TikTok user did not know what was happening but knew that they were in the middle of something extraordinary, and recording a video was warranted.

“It was just kind of like chaos, and no one knows what’s going on,” the TikTok user continued.

Eventually, the pilot made an announcement regarding all the commotion and told passengers that there was “a bad situation in the plane” but did not explain further about the woman who had tried to exit the flight while it was in the air.

During landing, things got worse. A flight attendant said that a woman “had an outburst” and suddenly tried to exit the plane.

“She was saying, ‘I need to get off this plane,’ and she went up to the exits and started banging on the doors, saying, ‘You need to let me off this plane!’” @lol.ariee said.

The woman turned aggressive and started biting and spitting at flight attendants. They were forced to “take her down” and use duct tape to subdue her for the rest of the flight.

The TikTok video of the woman strapped to her airline seat has been viewed more than four million times on TikTok. Footage shows a police officer and medical staff member waiting to greet the woman who had caused the stir midflight.

An American Airlines representative emailed a statement to Insider that stated that the woman “attempted to open the forward boarding door and physically assaulted, bit, and caused injury to a flight attendant.”

“We applaud our crew for their professionalism and quick effort to protect those on board,” the person added.